Using your supplies – guest blog #3 from Michele at scrap secrets

Hi my name is Michele and I am a craft supply hoarder. Can anyone else relate? lol

Today I am guest blogging for Laura. When I was trying to come up with a topic for this post, I was in the midst of cleaning and organizing my craft room. Between craft show season and making Christmas cards and presents, my whole house turned into my craft room.

So, I needed to regroup and start putting things away. In the process, I came across so many supplies that I had bought that I never used. (Most of them remain in the original packaging – how could I let this happen??) Which is how I came up with this topic – using your craft supplies!

Each week I participate in a Card Sketch Challenge over at My Favorite Thing’s blog. I love using sketches because it provides such a nice jumping off point, especially if you have a creative block! Usually I will stick to supplies that I know and have used before. This week, I challenged myself to see how many new items I could use in one card.

On Wednesdays they announce the new challenge and the winner from the previous week’s sketch. After they put this week’s sketch up, I looked at my stamps (which had just been neatly organized by their company) and selected two that I thought would work together. The first one that I chose was My Favorite Thing’s Pure Innocence So Tweet stamp set. I bought this one awhile ago, but yet it was one of those that remained in it’s original packaging, unopened. I knew that I wanted to do one of my new favorite techniques on this card, so I took a scrap of Canson XL 140 lb watercolor paper out. I inked up the PI image with Versamark, which is a sticky ink used for embossing. I took the black embossing powder I had from Michael’s (Recollection’s brand) and sprinkled it over the image and used my Martha Stewart heat gun to heat set the image.

Next, I used my Tim Holtz distress inks as watercolors. If you haven’t used these inks, I highly recommend them. You can do so many techniques with them because they react with water, which is why they are perfect as watercolor paint! The colors I used are: Salty Ocean (bird and sky); Tumbled Glass (sky); Seedless Preserves (dress and barrette); Black Soot (shoes and belt); Pumice Stone (to create the ground underneath her); Antique Linen (skin tone); Mustard Seed (hair); Scattered Straw (hair); Fired Brick (shirt and heart on dress); Festive Berries (shirt and heart on dress). Most of the colors I have used before, but Seedless Preserves is a new one for me. (First new item!)

In the sketch, there is a banner. I decided that this is where I wanted my sentiment to go, so I used one from the My Favorite Thing’s stamp set Friends Like Us. I chose the sentiment Be Yourself, I like you that way and stamped it in Hero Arts Pale Tomato ink. (Items three and four that haven’t been used – stamp set and the ink!) The sketch also shows a heart, so I used an extra heart die cut that I keep in small containers. I cut a small piece of white card stock out, inked up the sentiment in Pale Tomato ink, stamped it and then attached the small red heart next to the sentiment. 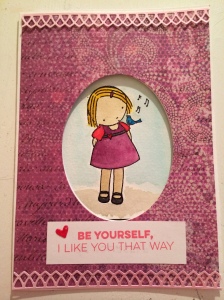 The last thing in the sketch was the borders on the top and bottom. I found some Martha Stewart border stickers and cut one in half because the sticker was too tall to fit under the sentiment. I trimmed it so that it fit nicely on the purple patterned paper. (New item number five!) The last step was to add a little bit of glossy accents to her shoes, the heart on her belt and dress and the heart on the sentiment. It gives a shiny look to the embellishment and makes them stand out. (And glossy accents is new item number six!!) 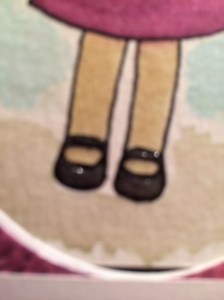 This card was so much fun to make and I really enjoyed using SIX new products in one card. I hope this inspires you to use some of the items that have been lying around in your craft room in a project! Thank you to Laura for letting me guest post on her blog this week and thank you all for taking the time to read this!
To see the YouTube video of this card, please visit http://youtu.be/izcuPbRKNog
Michele